What happens when two Kiwi artists head to New York and turn the UN headquarters into an iceberg? Earlier this year, artist Joseph Michael and composer Rhian Sheehan created Voices For The Future, a giant installation held ahead of the UN’s Climate Action Summit. This was effectively an enormous sequel to 2017’s While You Were Sleeping installation at Auckland’s War Memorial Museum. In advance of TEDxAuckland 2019, we sat down with Joseph to discuss the New York project, his own TEDxAuckland presentation in 2014, and what he’s learned along the way.

Earlier this year you turned the UN headquarters in New York into a giant iceberg. Tell us about how you gave this exhibit such a strong narrative.

Part of the agreement with the UN was that they wanted text as part of the piece. I asked myself, how do I represent sustainable goals through words on the side of a building? We came up with a concept which saw us interviewing six people in the six official languages of the UN - Arabic, Chinese, English, French, Russian and Spanish - covering the six continents [properly inhabited by human beings].

The installation was to build on the energy incurred by the youth movement and climate change, so it was amazing to have Greta Thunberg involved. We also had amazing people from all around the world speaking Arabic, Russian, Mandarin etc, with us matching each language to a continent. For example, we paired up Mandarin with Oceania, with Jason (our interviewee) speaking in Mandarin about living in New Zealand by the ocean. The text of this interview was then projected up the side of the UN building in New York. The woman who spoke Spanish, meanwhile, talked about the wildfires in the Amazon, with another woman speaking about the Siberian fires in Russian. Giving people a voice to share these incredible personal stories around how climate change is affecting them is an interesting way to tell the story. Also, having Arabic text up the side of a 40 storey building in New York is quite provocative, even with the translation. People were really impressed and excited by the installation, and it was really beautiful to see these different languages together. One woman complained, saying “I hope for you that people are calling the NYPD”. You want to touch on those raw emotions, understanding what prompts people to panic so much by seeing a language on the side of the building.

You seem to approach your artwork with a specific mindset. Tell us more about that.

I think of a topic that a lot of people care about, and ask myself, how can I engage people and create a shift in people’s interest in that topic? I find that there are documentaries and a lot of content that I admire, but I’m already really engaged with that subject. It excites me and fires me up in terms of persevering with making changes that are going to be good for everyone. But, there’s also an audience that I feel we really want to change, and as soon as you talk about climate change there’s a defence mechanism. So, through the artwork I find that there’s nothing they can really get upset about. They can’t hate it, so when they appreciate it - especially with the sound and epic nature of it all - they’re really hit in the heart. People go from enjoying it to asking their own questions.

I also take on challenges by using different technologies in ways people might not have seen or used before. For example, the projection mapping is interesting because I use it in a sculptural way - there’s a 3D element to it.

What are you trying to achieve through your art?

I like big themes and topics, and find interesting ways of exploring that. For example, Antarctica is one theme and there’s always a subtext to that. The environment features heavily in my work, not necessarily responding directly to that, but posing questions. Putting an iceberg on the side of a huge building is an indirect way of talking about climate change. It also enables people to get engaged with that topic, and connect with it in a way that appeals to a wider audience. I find that with a lot of these subjects, as soon as you approach the topic, a lot of people completely shut off. So with the iceberg installation, there’s something majestic about that (the occurrence of nature and object of it) and people can appreciate that for what it is, and then maybe go on a journey of learning and understanding a bit more about the environment. 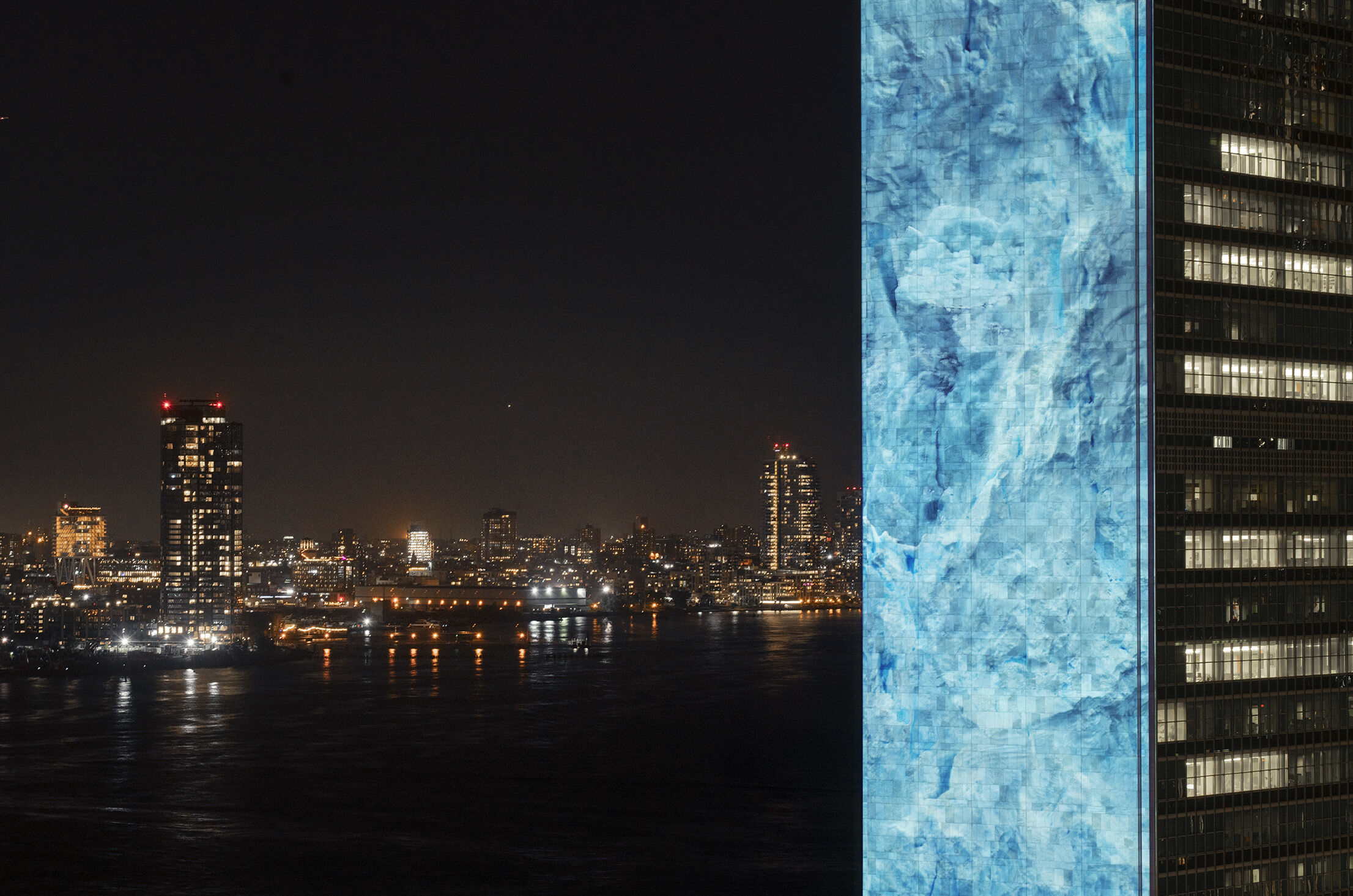 You say that you like your art to prompt questions and discussion - how has your work created an impact?

Bringing the size and scale of it into an urban environment is really powerful. Standing in front of that, when you see something which is much bigger than yourself… you feel smaller. Seeing the enormity of this piece, the ice crashing off the side makes a tremendous impact, especially given that we’re also experimenting with sound. The UN headquarters in New York, for example, is a 40 storey building. When you see a huge iceberg crashing down… it has an impact.

You clearly have a passion for collaboration, often with some pretty prolific people. How has that process been, and what kind of results have you enjoyed?

For any collaboration there needs to be common ground. You need to be on the same wavelength. The composer, Rhian [Sheehan, who scored Voices For The Future] – his sound syncs really well with how I feel about the artwork. In terms of the Antarctic work, he was trying to translate what I felt in Antarctica, which isn’t easy. The sound that I’m looking for is translating that feeling of being there in person, that sense of awe. Our collaboration will go back and forth - he’ll send a number of samples, and I might then give him feedback. So we go on a journey together. On the last show, he stirred it in a direction which wasn’t somewhere I would’ve taken it, and the magic really happened.

I really enjoy collaboration, but as an artist I need to have a really clear idea about where I’m heading. I stick to my ideas pretty strongly; it’s pretty important to have someone you’re not afraid to give clear feedback. Sometimes when you’re working with someone for a number of years you develop a mutual respect, and you can say things you might not be able to otherwise.

All of this hard work must have led to some pretty interesting challenges. What have been the biggest hurdles, and what have you learned as a result?

The biggest challenge I always face in taking on such large projects is the percentage of my time that I’m able to dedicate to the creation aspect of the work. There’s so much that goes on behind the scenes which takes up huge amounts of time. For New York, I spent 5-10% of my time in a creative mode, and it’s also important to be able to switch roles. I’m lucky that I can facilitate being a producer and an artist - it’s a necessity more than anything. But so much of the time it’s about balancing between production management, producing, obtaining permission in the bureaucracy within some systems, specifically the United Nations. There was a huge learning curve when I worked with the UN. You have to be clear with what you want, because in a system with multiple people answering, not quite knowing where the leadership is in terms of the hierarchy, and where the permission sits, but if you’re direct, and ask for a specific request to be responded to then it gets actioned.

Outside of the artwork you’re having conversations about the infrastructure, production, and city’s permission. There’s a whole sphere outside of just pasting images on the side of the building – which adds complexity, time, resources (we were restricted to only working at nights for example). Patience is huge, it’s important not to responding too quickly to things which upset you. There’s always time, even when its compressed.

Why was the TEDxAuckland talk important to you?

It gave me confidence. It’s an incredibly challenging part of the process to be able to speak about your work, but I really enjoy it now, and love the public speaking element of it. It was an interesting process, and I was really lucky to have the opportunity. A lot of amazing things have come from that, and growth from different areas, so I am really fortunate.

So what audacious adventures can we expect from you next?

There are three major projects I’m working on. I’m continuing to develop the icebergs overseas, and am determined to take it to the Lincoln Memorial. It’s a globally-significant site, and America, in particular, has the furthest way to go in terms of changing the world and taking climate action. Another project involves mapping a full-scale version of the Tāne Mahuta tree, using different technologies. I’m working on developing the technology to scan the root system, because I want to have a complete scan of the tree so we can create an augmented reality installation where you walk into a digital forest. The intention is to test ways you wear the artwork and walk around within the forest. It leaves a trail of heat, and the environment reacts to you; it’s a subtle look at the way humans are impacting the environment. With that same project, I’m working with the Amazon rainforest, I’m going into the rainforest to map significant trees. The third project is around oceans and navigation. I’m experimenting with bioluminescence, recording it and finding ways we can translate that into an experience. 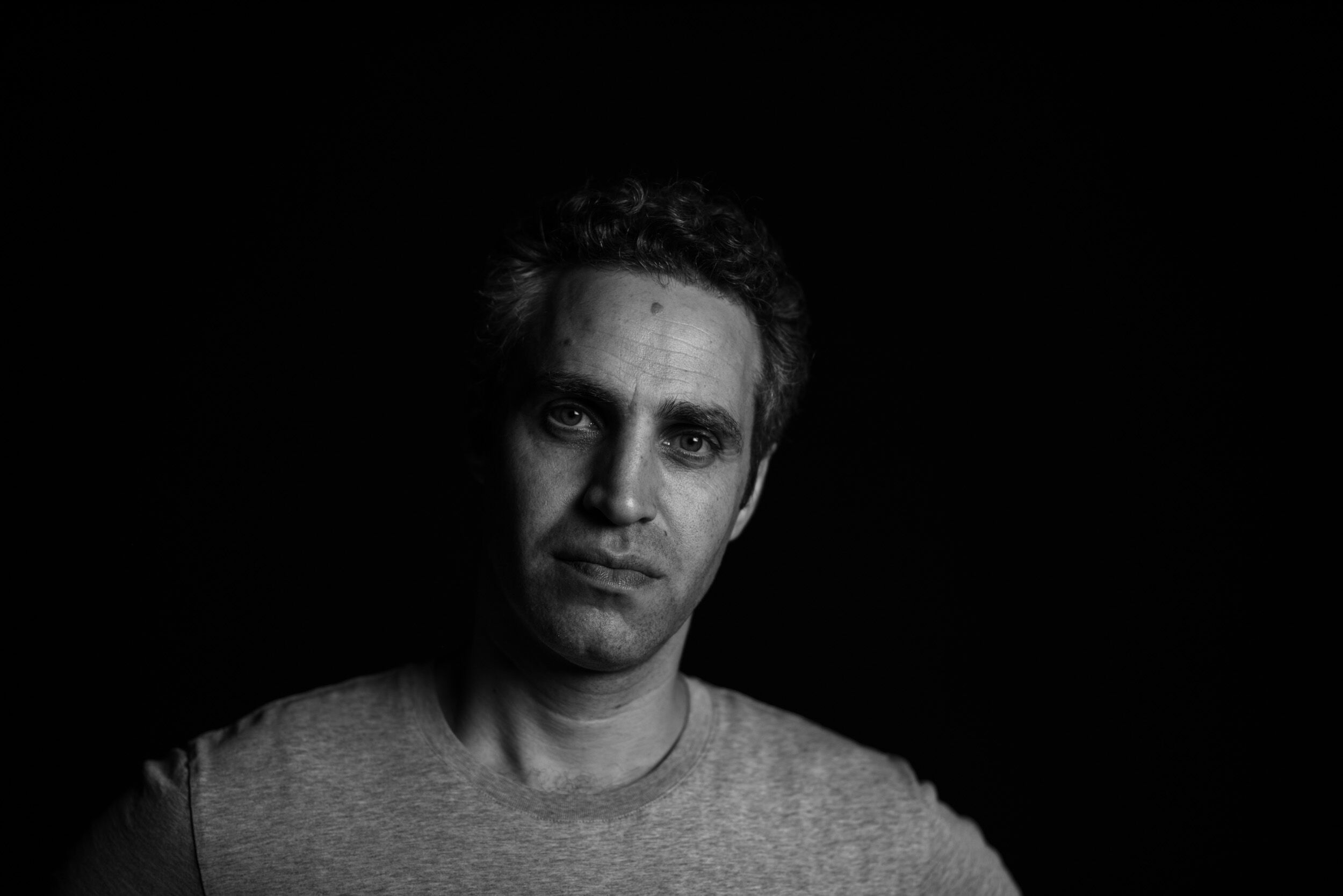 Discover more about Joseph Michael and his incredible journey here.